The late Forbes magazine publisher Malcolm Forbes famously said, “Money isn’t everything as long as you have enough.” There’s definitely some wisdom in there, but what exactly is “enough” when it comes to retirement?

Listen to Wall Street, and you should be amassing a $2.1 million nest egg. Not only is this unrealistic for most folks, it’s also unnecessary. The real answer to what constitutes “enough” money for retirees is based entirely on each individual’s unique financial situation and retirement goals.

My research on retirees has shown that the happiest of the lot carry the attitude that “I’ve got enough money to be pretty damn comfortable and do what I want.” This is what I hear, in some form or another, from my clients at my fee-only registered investment advisor firm.

This wasn’t always the message I heard from clients in my professional life. Before my current position, I worked as vice president of investments at a very well-known Wall Street investment firm. The difference in my clients back in those days? Those clients yearned for more money, even though they had plenty to live comfortably on. They wanted more and more and weren’t at peace with what they did have. They weren’t happy when it came to retirement because they always felt like they were living in lack.

But think about it. Real wealth is relative. Say, for instance, you’re an avid golfer. Your retirement income and investments allow you to belong to a club that allows you to play every day at courses across the state. The fee is a fraction of the high-end country clubs. Maybe there aren’t ornately carved fountains circulating rose water on the grounds, but you get to golf. For so many people, this is enough. They don’t need the VIP treatment; they just want the freedom to do the things they love.

For these non-VIP happy retirees, their money is simply a vehicle to deliver them to the retirement of their dreams. It looks different for everyone. One couple I worked with was traveling the country in an RV. Another loved to travel but had never visited Asia, so they planned a trip. One couple had the free time to be extremely involved in their grandkids’ lives. Another still enjoyed being physically active, and would walk, bike, or play tennis every day. While different in their pursuits, all of these retirees were having the time of their lives. And it didn’t take a massive bankroll for them to do it. It just took “enough.”

What I noticed was that the happiest retirees live “in the middle.” They don’t skimp on luxuries, but they also live prudently and focus more on life experiences than things. They are comfortable with their money, they make it work for them, and they don’t obsess over growing it ad infinitum.

From my research, I identified what I call the plateau effect: after a certain amount of wealth, happiness comes at diminishing returns. And the plateau effect doesn’t just apply to investments and income; it’s present in spending. After a certain point, no matter how much you’re spending, happiness tapers off. The happiest retirees seem to already understand this truth.

Consider this data point: the average spending from unhappy retirees jumps 25 percent to reach the slightly happy retiree mark. But then, spending levels begin to flatten out and rise at a much slower pace, eventually becoming remarkably similar.

And here’s another one: from unhappy retirees to slightly happy retirees, median spending increases by 60 percent. After that, however, once we’re in the moderate to extreme level of happiness for retirees, it levels off significantly.

Slightly happy retirees spend about $4,000 per month, while very happy retirees only spend a few hundred dollars more. This isn’t the large spread between spending and happiness that you may have imagined. And in order to spend around $4,000 a month, a family would need to generate $50,000 post-tax annual income. Figure 15 percent tax, and we’re talking about $58,822 needed for yearly income. Beyond this amount, there’s a decreasing amount of additional happiness with each dollar spent.

So how much money do you need to avoid being an unhappy retiree? This answer is highly variable depending on your retirement goals and the standard of living you enjoy. But one thing is for certain, if you value experiences over things, your money should stretch further than you may think. The benchmark seems to be an annual income of about $58,800. Anything, in addition, is great, but don’t expect your happiness to skyrocket just because your income does.

When it comes to finances and retirement, more doesn’t always equal more. Stay away from the VIP mentality and the tendency to amass wealth for wealth’s sake. Instead, center your planning on your own, unique financial goals, and decide what “enough” means for you. As with most things in life, there is no one-size-fits-all answer. Just focus on finding your happy place in retirement, however that looks. 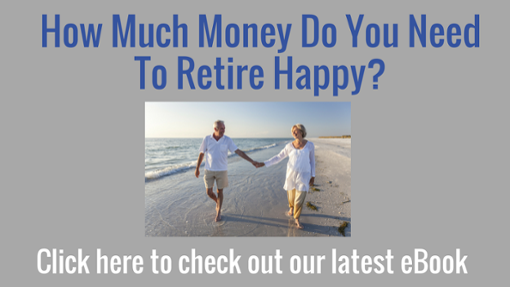 Check Out: How Happy Retirees Use Hobbies To Get ‘Richer’

Previous ArticleBaking For Your Loved Ones Has Several Lasting Health BenefitsNext ArticleWhen does clock start ticking on 0-percent card deal charges?
Disclosure: This information is provided to you as a resource for informational purposes only. It is being presented without consideration of the investment objectives, risk tolerance or financial circumstances of any specific investor and might not be suitable for all investors. Past performance is not indicative of future results. Investing involves risk including the possible loss of principal. This information is not intended to, and should not, form a primary basis for any investment decision that you may make. The information contained in this piece is not considered investment advice or recommendation or an endorsement of any particular security. Further, the mention of any specific security is solely provided as an example for informational purposes only and should not be construed as a recommendation to buy or sell. Always consult your own legal, tax or investment advisor before making any investment/tax/estate/financial planning considerations or decisions.